Catalogue of the Coleoptera of the Netherlands

The Catalogue of the Coleoptera of the Netherlands gives a comprehensive review of the coleopteran fauna of the Netherlands. Up to 31 December 2007 a total number of 4163 species have been recorded as indigenous, representing 1236 genera and 96 families. Of all species the occurrence in each of the twelve Dutch provinces is given. Tow time periods are recognized: before 1967 and the period 1967-2007. The large majority of records is based on the study of collection material.

A considerable number of 475 species (11% of the fauna) has not been observed since 1966. These species are listed together with the year they were last recorded from. Another list enumerates all non-indigenous species recorded from the Netherlands: non-established introductions and accidental migrants. All faunistic changes since the publication of the previous catalogue (Brakman, 1966) are accompanied by references to the relevant literature. This Brakman-catalogue can be ordered simultaneously for just € 5 extra (both for members and non-members).

Introductory chapters treat the methods followed when compiling the catalogue, as well as a brief history of Dutch coleopterology. Furthermore, an extensive review of deceased Dutch coleopterists and a list of public beetle collections in the Netherlands is presented. 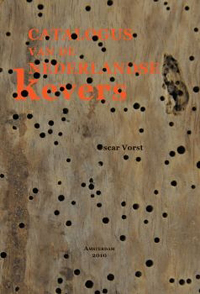